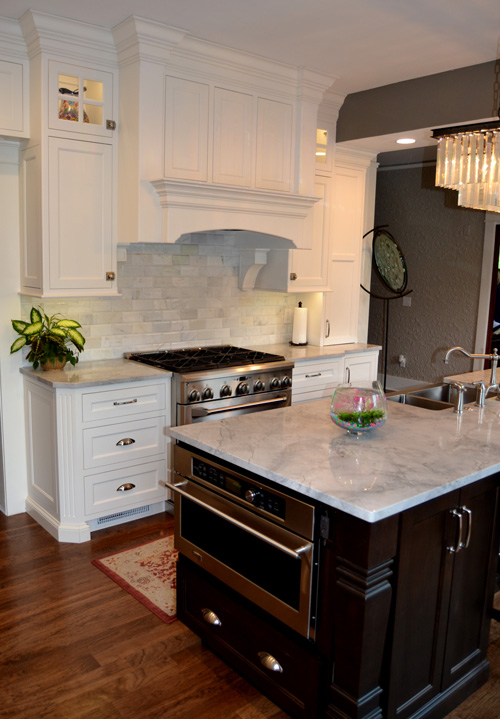 When I first stepped into this kitchen it was all wrong for this beautiful, historic home. The original architectural details were all intact until you hit the kitchen. It was clear that someone had recently replaced the cabinetry and tops (and someone had done a disservice to the home). The first issue with this kitchen was the 48” high half wall/bar peninsula that broke up the space and isolated anyone working in the kitchen from seeing out. The second issue was that the appliances were located awkwardly and the layout was not great for prepping, cooking, cleaning, or serving. My clients expressed that they really wanted to open up the space and rearrange everything. After finding out that a wall they wanted to eliminate was load bearing, they looked to me to come up with a kitchen plan that would open up the space. Some of the obstacles were unsightly soffits that could not be moved, a chimney that jutted into the space, and grill heating units that could not be removed. We ended up moving all appliance locations and gave them a very functional work triangle. We opened up the space by eliminating the peninsula and adding a center island. We also added a doorway to the kitchen that opened up to a hallway which really improved the flow of the house in general. By putting the refrigerator and pantries on one wall, we were able to cover up one of the soffits almost entirely with false doors that went all the way to the ceiling. We went with white cabinets with inset construction and a flat panel door and brought in a rich chocolate stain for the island. We kept a traditional feel with the moldings and details but kept clean lines to give it the simple classic look that the rest of the house had. We went to the ceiling with the cabinets and did glass doors with mullions to break up all the white. We decided on latch style hardware that highlighted the antique meets modern look that the clients wanted. The countertops are quartzite to give that marble look without having to commit to the high maintenance aspects of marble. This kitchen embodies what I love about kitchen and bath design. There were many obstacles that proved to be a challenge. It was a puzzle that needed solving and there was nothing “cookie cutter” about this design. The improvement to the home was outstanding, and most importantly, my clients were thrilled with the outcome.

Tags:
kitchen remodel
Appliances. Affect. Everything.
So why not marble?

Hannah Wilson has been a part of the Columbia Showcase team since 2008. She graduated with a Bachelor’s Degree in Interior Design from the University of Central Missouri. Hannah prides herself in getting back to her clients quickly with fresh, creative and functional designs. Her clients are especially appreciative of her willingness to listen to what they want and her responsiveness throughout the project. Hannah’s home base is in the Jefferson City area, making it easy for her to do work not only in Columbia, but also the Lake area as well.

Have a topic suggestion for our blog or a general question to ask? Contact us and we can help.